Korean giant Samsung plans to invest up to $192 billion over 20 years at two sites in Texas to build at least 11 semiconductor manufacturing plants — “factories.” Investments that would allow the United States to return to the race for domestic production

One hundred and ninety-two billion dollars: this is the 20-year investment plan that Samsung presented at the end of last week. At a rate of nearly $10 billion a year over twenty years, Samsung could build up to 11 semiconductor plants in Texas. This would make it one of the most important foreign investments in the territory.

Why is a South Korean company that weighs a quarter of the GDP of its country of origin interested in investing such sums in another country? Why does the United States, which expels certain companies (especially Chinese) from its country, a priori open its arms without restrictions to the Asian group? What are the stakes of such an investment not only for the US and Samsung, but also for the semiconductor world? Here are some elements of the analysis.

A project, not a promise (but the factory is already under development)

Taking advantage of the upcoming end of a ten-year local tax exemption for companies incorporated in Texas, Samsung unveiled a project that, at its most optimistic, could represent 11 chip manufacturing plants (“factories”) worth $192 billion. And this is not a delusion, as the smallest factory using the latest generation of “extreme ultraviolet” (EUV) engraving machines costs at least 10 billion.

In the documents handed over by Samsung to the US administration, nothing obligates the Korean to build anything at the moment. What bolsters Samsung’s offer, however, is that it already operates two factories in Texas (including the one that makes SSD controllers we already told you about), and that it’s currently building a third for a whopping $17 billion. So Samsung already has a foothold and, unlike TSMC, doesn’t need to build a supply chain from scratch. Outside of the tax-free decade, if Samsung is already established in the United States and plans to spend such sums, it’s for an obvious reason: there are plenty of potential customers. Apple, AMD, Texas Instrument, IBM, Qualcomm, Nvidia, Micro, Google, Broadcom, Lattice, Marvell, Cirrus Logic, Ampere… OK, that’s it! The list of American companies that develop their own chips and need production facilities is perhaps the largest in the world. And for the production of their chips, all these companies turn to two players: Samsung and TSMC. However, the latter clearly has an advantage at the moment both in terms of neutrality (Samsung makes smartphones, Apple tries to avoid its services) and in terms of productivity and performance. But even though TSMC is strong, this actor represents a big risk: putting all your eggs in one basket. This dependence on one player is also recognized by Asian companies: MediaTek has just announced a partnership with Intel’s IFS service to manufacture its chips.

In addition to this concentration risk that TSMC’s case presents, its geographic location poses a problem. One of the elements of the world’s number one semiconductor company’s success is its well-established supply chain, with manufacturing facilities located very close to each other, all located in Taiwan. From a geological and climatic point of view, Taiwan suffers from chronic typhoons and earthquakes, and experiences increasing drought (water is an important element for the production of chips). But above all, it suffers from the Chinese shadow. If the country is sovereign, Xi Jinping’s China still wants to “repatriate” the island. With weapons, if necessary. An entire section of the military doctrine and training of the People’s Liberation Army (the name of the Chinese army) revolves around the goal of “taking back” the island. And most of the training of his forces takes place in the form of operations against a “separatist island and a powerful ally.” You don’t need to be a soothsayer to recognize Taiwan and its protector, the United States.

Taiwan’s government knows this, and part of its defense doctrine is based on it Silicone shield, that is, the confidence that its importance in the production of semiconductors guarantees it American protection. Even if the Americans give their support to Taiwan, and increasingly strongly, it is not certain that Uncle Sam’s country is ready to return to open war with China on the Asian front. The presence of state-of-the-art factories on its territory is a guarantee that in the event of a conflict, the American champions will be able to continue producing chips. For both consumer products and military applications, TSMC specifically engraves chips for the F35.

Intel doesn’t (yet) know how to work with others 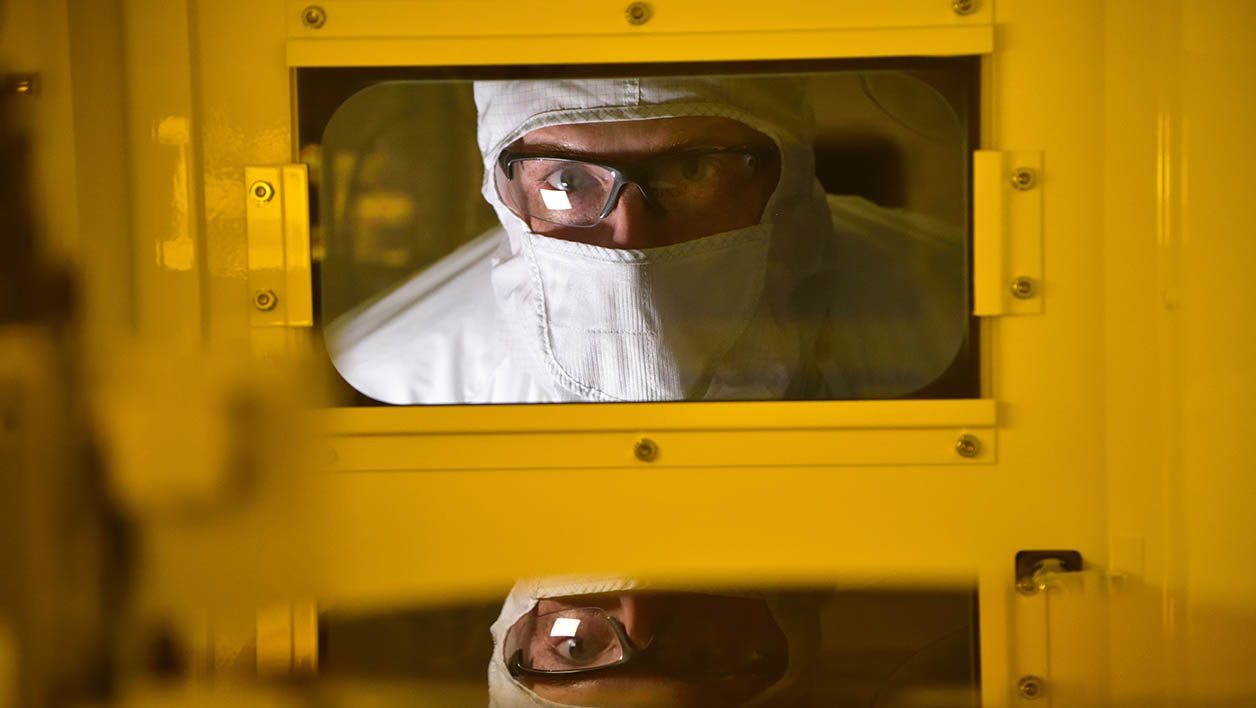 He is one of those American champions who also know how to make chips: Intel. And not only the world’s number 1 in this sector, which invests tens of billions at any price – even in Europe and especially in France – but in addition, last year it launched its foundry service Intel Foundry Services. Producing only for its own needs, the chip titan decided, on the initiative of its CEO Pat Gelsinger, to compete with TSMC and Samsung.

If the first letters of intent — with Qualcomm and MediaTek — are signed, Intel will need several years to continue technological progress and learn to work with others. It is this ability to put itself at the service of its customers that is one of the strengths of TSMC and Samsung (which, for example, engraves Nvidia’s GeForces). However, these human, technical and organizational skills take time to develop. And they are implemented in multi-year projects.

If Intel can become a major third-party foundry to tease TSMC, Samsung, UMC or GlobalFoundries, it will take time. Samsung’s position here is very strong, because the Korean is several lengths ahead of the American in this area, as well as in EUV engraving.

Faced with China, the Americans want to regain their leadership 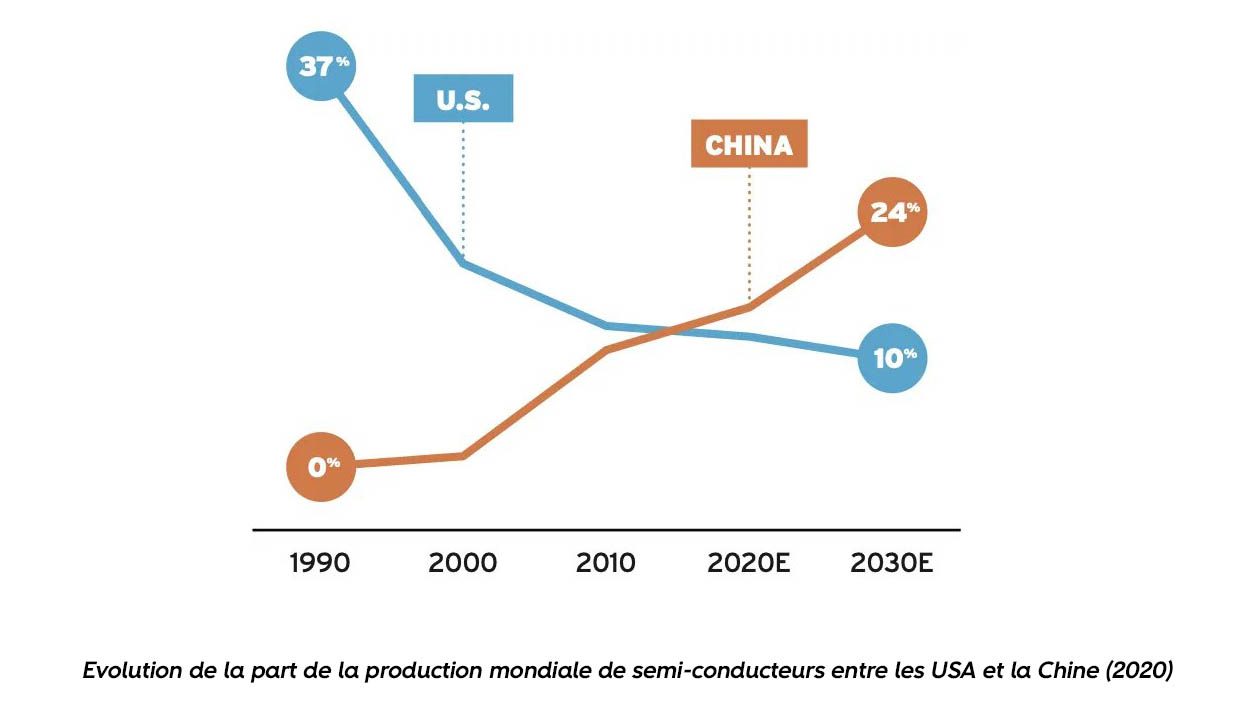 With only 12% of total chip production compared to 37% in 1990, the United States is losing pace in an industry that is nonetheless increasingly strategic. On the one hand, for the players in the technology industry, be it Apple, AMD or Nvidia, and for the electronics sectors on the other hand. The semiconductor shortage that hit us for two years brought the auto industry to its knees. Washington Post qualified for “the worst crisis in 50 years”. Forcing manufacturers to remove features, components, or leave cars to rot in warehouses while waiting for precious chips to arrive… from Asia, for the vast majority.

It was to redress this balance and limit its reliance on Asian players, particularly China, that President Biden’s administration launched the CHIP Act, a $52 billion aid plan for the sector. An operation that, like many political projects in the United States at the moment, is dragging its feet. Thus, the appearance on the table of a huge long-term investment plan is a godsend for the American authorities. Because Samsung’s plans don’t mention the CHIP law and just rely on Texas’ help.

Will Samsung’s plan work? If so, to what extent: half of the project? The promised almost 200 billion? It is impossible to say. There is no doubt that such an investment will further strengthen the ties between the two countries (with 23,000 American soldiers stationed on its territory, South Korea ranks 3rd).d the largest American “base” after Japan and Germany), which, together with Taiwan and Japan, forms the “anti-China” axis both in the field of semiconductors and from the point of view of defense.