When we follow a little of the world’s stock exchanges, we quickly realize that everyone’s goal is to identify a strategy that will make them rich or famous. Rich because you will bet on the right horse, the right cryptocurrency or hear the right information at the right time, but especially BEFORE the others. Famous because you made any prediction – possibly the most improbable – and you were right. One time will be enough to become a financial demigod for life. We are now at a stage where we no longer know what to do or think, but we are still convinced that we will find out tonight.

Yes, because tonight we will find out whether employment is better or worse, and depending on the function, we will draw the necessary conclusions: either inflation is slowing or the economy is in the process of collapsing due to rising interest rates. Then it remains to assess the extent of the damage to know if what the FED is doing is:

1) Good, because it wants to curb inflation
2) Bad because it will put the economy into recession

US markets lined up for the fourth session last night. The growth of the growth sector is clearly visible. A sector that everyone is jumping into, assuming that if it really does go up, it’s obvious that it’s the emerging sectors that will lead the dance – they’ve been hammered so hard lately. So it remains to be seen whether the NFP data that will be released tonight and the CPI data that will be released next week will allow us to make a decision despite our indecision. If the markets ended yesterday with a fairly strong rally again, accumulating a 7% rebound in the Nasdaq 100 in five sessions, it was mainly because the “market” began to trust the actions of the Fed… However, it is still quite esoteric as a reflection.

To sum up what’s happening in the world’s stock markets and in the jaded psyche of investors, I believe there was a phrase uttered on Wall Street last night that pretty much sums it all up. This sentence is:

“Stakeholders are pleased to see that the Fed is still fighting inflation and that, given statements from some Fed members, we can expect a further 75 basis point hike in July, but after that the Fed’s action should make it possible to aim for a ‘soft landing’ » and just one more rate hike of 50 basis points in September, which should slow inflation without doing much damage to the economy. Not to mention that expectations for Q2 results are so low that we could have some nice surprises.”

So. I realize that the sentence in question is quite long, and to be honest, I wrote it myself with fragments of sentences that were spoken last night. So it’s a bit like a DIY summary of global finance or IKEA investing. But what to remember; is that this sudden return to “bullishness” is largely due to the fact that we’re starting to think the Fed did the right thing by being aggressive on rates, but not too aggressive, it allowed inflation to slow down without slowing growth much. We have absolutely no guarantees about this state of affairs, but for now we believe it, and that’s good enough for us.

If confidence seems strong today, it wasn’t always the case, as if we recall the recent 7% sell-off on the Nasdaq (I happen to say Nasdaq, because it’s always impressive, and when it’s impressive, it always sells better). So, during the last 7% sell-off on the Nasdaq, we had the same data as yesterday, it’s just that our perception has changed. Our perception and the fact that raw materials fall apart one by one.

In normal times, a general decline in commodity prices would be seen as a significant slowdown in the economy, and in normal times we might have completely panicked because the recession was knocking on our door and we were still in the shower and not at all dressed to answer the question door . Except that over the last week, we’d rather see oil at the bottom of the tanks, copper rolling, wheat entering a bear market, and even finally, we’re happy to see gold – which is supposed to be a “hedge” against inflation – it’s just off the top of my head because that means inflation is losing ground and that the numbers coming out next week and this afternoon will probably encourage the Fed not to raise rates too much. Job done. That’s what we believe anyway , what we are thinking right now and in the moment. Knowing our ability to focus and our skills to see beyond the end of a session, we know that this can change as quickly as the weather when you walk into the mountains and realize that forgot their K-Way. 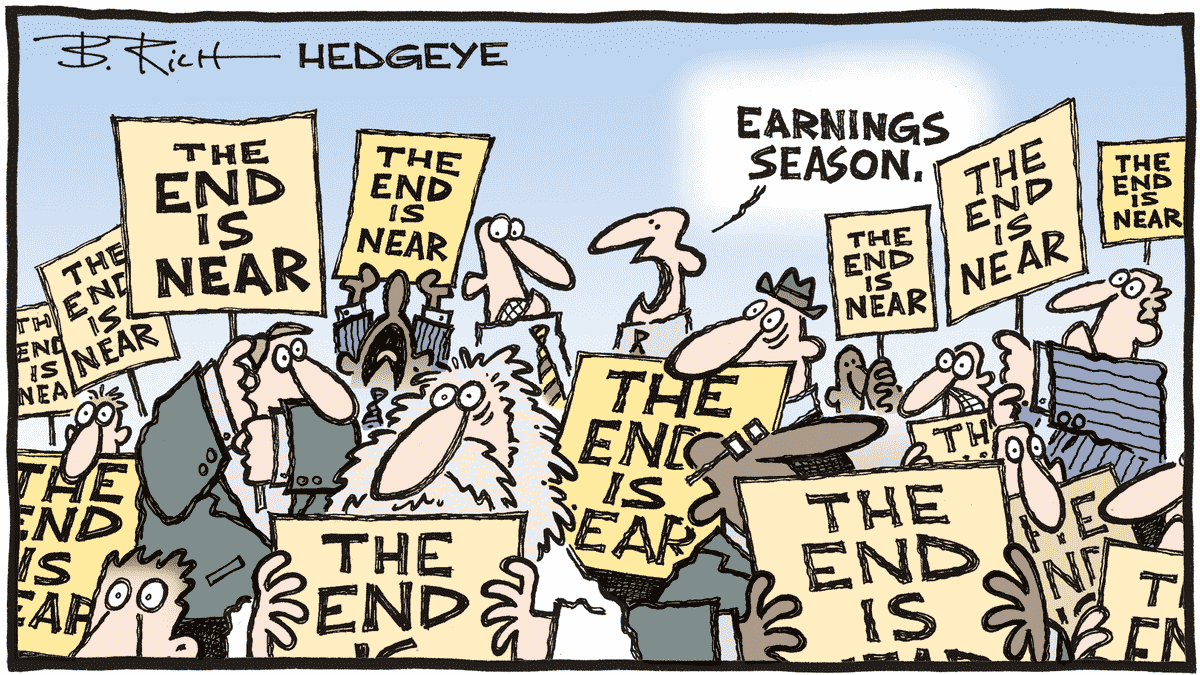 Perception will do the rest

At the moment, everything seems to be going for the best in the best of worlds. The situation that made us panic, that made us panic a few weeks ago, is no longer the same. It’s almost as if all problems were solved with three rate hikes and all fears were dispelled. All that remains is for the war in Ukraine to end, for Putin to turn the gas taps back on, for the Fed to announce that rate hikes are over and that it will do “whatever it takes to help the economy recover and the markets as well.” . Especially markets.

Except that at the moment we don’t know how it will all end. Unless the war in Ukraine is far from over. That Putin still hasn’t opened the gas taps, that the oil infrastructure is still too old and that no one wants to reinvest because oil isn’t ESG, that there aren’t enough rare metals on earth to put batteries in anything and everything. And that, first of all, at the moment it is still too early to talk about a “soft landing”, that at the slightest sign of the opposite we will take it back in the teeth, and most importantly: that according to the usual investor cycle, it does not seem that we when ever went through despair and depression. Not to mention the fact that the panic side obviously hasn’t been fully utilized yet… I can’t get over the plantation side, but I still feel like our sudden enthusiasm might still be a little premature. I wish I could be wrong, but if I am right, it will still have to be noted in the corner.

Asia is a bit green this morning. 0.6% in Tokyo and 0.10% elsewhere. Futures fell 0.4% and former Japanese Prime Minister Abe was just shot dead during a speech, and the outlook looks bleak. On the other hand, the mentality of morning investors in Asia looks somewhat the same as in the US last night: we feel confident about growth and the fact that more than a few rate hikes will slow down such a strong global economy that has just survived the pandemic. Provided that the “warrior” mindset of the market continues to work, otherwise we are in trouble.

For the rest, oil is at $102.88, gold is at $1,739 because no one is afraid of inflation anymore, and Bitcoin is FINALLY back to $22,000. We expect further stratospheric targets in the coming hours. As for the exciting news of the day, we note that Twitter is cutting staff, the “Musk takeover” is increasingly being called into question, and its team of negotiators still can’t come up with hard numbers on “fake accounts”. Elsewhere, GameStop regained 15% in yesterday’s session as it announced a split. This is normal. And after the close, the stock was down nearly 6% again as the CFO was kicked out along with a bunch of employees. This is also normal.

We also note, as mentioned above, that commodities have more or less returned to their pre-Putin arrival in Ukraine, and that this is encouraging for future inflation. On the other hand, we should also note that buying a new car is always just as difficult, since delivery times are more like a game of chance than a real commercial reality. Not to mention, you never know what you’ll actually have inside until the car is in your garage. “We are very sorry that we are short of a steering wheel, but we will call you back in three months to supply it. Come on… Have a nice trip!!! “.

And then there’s Krugman. Who is still a Nobel laureate in economics, who believes that fears of galloping inflation are clearly overstated and that there is no risk of STAGFLATION. One thing is certain, he did not follow the same course as Roubini, for if they went to eat together one day, there would be one with a nosebleed at the end of the meal. Also note the 25% bounce from Bed, Bad and Beyond. The same, Bad and Beyond, which 10 days ago was assessed on the verge of bankruptcy. The reason for the promotion? The new CEO of boxing bought $250,000 worth of shares in his company. If that’s not proof that she knows something, I don’t know what is. Moreover, everyone knows that CEOs are always right. Well, except when they’re wrong. Let’s also not forget that we expect the resignation of Johnson from the post of prime minister as soon as possible. The market should not worry, but let’s note the thing in the corner.

On the economic front, we’ll have France’s trade balance, the European Central Bank’s economic forecasts and Madame Lagarde speaking. But frankly, the only thing the market will be interested in is the US employment numbers. The Labor Department is expected to announce that the economy added 270,000 jobs in June. That would represent a slowdown from May, when 390,000 new jobs were added. If the numbers are correct, we can say that the economy is calming down but still growing. On the other hand, we can also say that inflation will calm down. It’s almost too easy in the stock market and economy.

Futures are down 0.4% at the moment – still – and I can only wish you a very good day, but above all a very good weekend and see you on Monday because I will never be on holiday. Or almost.

“You have brains in your head. Your feet are in shoes. You can steer yourself in any direction you choose.” -Doctor. Seuss