Professor Wei Shi, President of the University of Hong Kong Science and Technology (HKUST), was awarded the Order of the Legion of Honor by the Consul General of France, Mr. Alexandre GIORGINI, on May 6, 2022, during a ceremony at the HKUST campus. This award was presented on behalf of the President of the Republic in recognition of the far-sighted leadership of Prof. Neck in the field of education, his outstanding contribution to science, as well as his role in the development of university cooperation between France and Hong Kong. 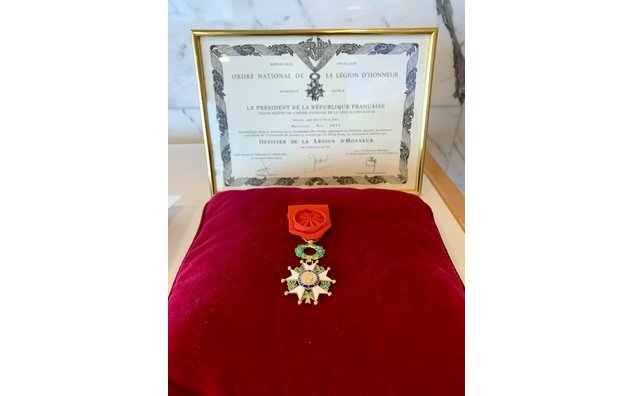 The Order of the Legion of Honor, established by Napoleon Bonaparte in 1802, is the highest award of the French Republic.

President of HKUST prof. Wei Shi (left) was awarded the Order of the National Order of the Legion of Honor by Mr. Alexandre GIORGINI (right), Consul General of France in Hong Kong and Macao on behalf of the President of the French Republic.

As the President of HKUST and Head of the Department of Mechanical Engineering and Aerospace Engineering, Prof. Shea played a central role in establishing exchange and cooperation programs between HKUST and major French higher education and research institutions. Convinced that sustainable development is one of the major challenges of our era, he encouraged the strengthening of cooperation with France in areas such as green finance, green technology and the preservation of the world’s oceans.

Prof. was awarded the Order of the Legion of Honor. He is shy because of his enlightened spirit, “said the Consul General of France, Mr. Alexandre Georgini, during the ceremony. “According to philosopher Denis Diderot, there are three main ways to spread light in the scientific field: observation of nature, reflection and experience. The teacher. Shea successfully studied them all. He was inspired by nature, including Grandma’s Flight, for his work on aerodynamics, with the ability to go beyond his specialty to reflect and open to the wider world. It is a pioneer in sustainable development in Hong Kong, and HKUST has the largest solar panel park in the area. I am proud that France is a key partner in this area and I look forward to the forthcoming signing of a Memorandum of Understanding to launch Center for Sustainable Development of France-HKUST. »

Professor Shea said he was honored with this prestigious award: “Over the years, HKUST has established close relations with the French Consulate and many French institutions. In 2017, we founded Innovation Center of France-HKUST to promote research cooperation and exchange between our scientists and French partners. Thanks to the efforts and enthusiasm of many partners, I am glad that our relationship is gradually strengthened through renewed agreements on sustainable development, innovation, as well as the promotion of artistic events and joint activities of the university. Today I accept this recognition mainly on behalf of my colleagues from HKUST. »

As part of his responsibilities at HKUST prof. Wei Shi developed his humanistic vision of education through a variety of initiatives that promote excellence and multidisciplinarity. In the spirit of dialogue between cultures and mutual understanding of prof. Shea also supported the relocation of the French Center for Contemporary Chinese Studies (CEFC) within the HKUST School of Social Sciences. China Perspectives, CEFC Quarterly, is a world-renowned magazine indexed in Social Science Citation Index (Web of Science) from 2019.

Prior to joining HKUST as Dean in August 2010, Prof. Shea was Professor Clarence L. “Kelly” Johnson and Chair of the Department of Aerospace Engineering at the University of Michigan. He is the author or co-author of six books and numerous scientific articles on air and spacecraft, thermology and biomechanics. He is also the editor of Cambridge University Press’s book on aerospace engineering (Cambridge Aerospace Book Series) and co-editor of the Encyclopedia of Aerospace Engineering, a large reference work published by the American publisher of the scientific journal Wiley-Blackwell.