The Israeli was recently extradited to Germany to stand trial for his alleged involvement in several investment frauds offered to German citizens, the Ynet news site reported on Thursday.

Yuri Dashevsky, 33, is one of 15 people arrested in 2021 during a raid on a call center in Petah Tikva at the request of German police.

Israeli police have arrested Dashevsky and three others on suspicion of fraud with German citizens through binary options, currency and cryptocurrency fraud.

Receive our free daily edition by email so you don’t miss any of the best news Free registration!

These individuals are accused of being part of an organized gang that would run several websites offering risky or fraudulent investments between 2015 and 2019. The names of the respective sites were revealed: IntegraOption, SolidCFD, TradeSolid, BitCapitalMarkets, GetFinancial, ProCapitalMarkets, NordCapitalMarkets, ProfitsTrade, FXPace, AcceptTrade and GainFinTech.

According to the Bamberg Prosecutor’s Office in Germany, these websites, all linked, were run by four suspects and their accomplices from call centers located in Israel, Tbilisi, Georgia, Yerevan, Armenia and Chisinau in Moldova.

In addition, in 2019, the group reportedly also ran FXLaws and Tradelegal, through which they offered to help victims of fraud get their money back for a fee. They would take the victims’ money in their pockets without helping them, German prosecutors accuse.

It is noted that the suspects managed to persuade investors around the world to invest in foreign currency, binary options and other financial instruments. Regulators say that investing, which often involves betting on the stock market without owning the securities in question, is illegal and fraudulent.

The suspects are accused of using the money entrusted to them by investors to run their call centers and platforms, as well as for personal needs.

German victims alone have lost several million euros, German prosecutors say. These sites were designed to attract investors around the world, which suggests that the losses would be much higher.

Eleven websites, which the German prosecutor’s office said were controlled by the suspects, operated on two platforms: SpotOption and Tradologic. 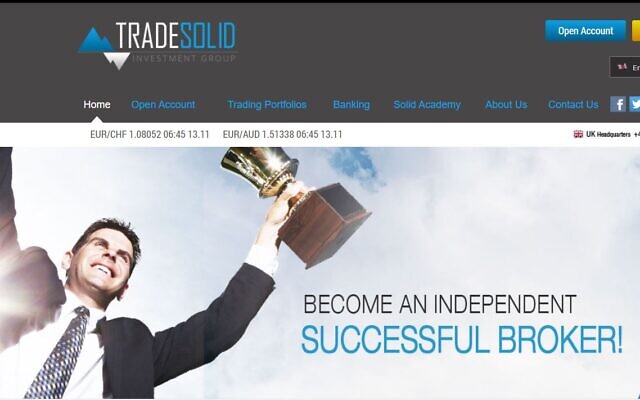 The Israeli crime news site Posta reports that in October last year, Israeli police allegedly detained and questioned a lawyer who may have been involved in running the sites at the request of German police. , from the call center in Petah. Pumpkin.

According to a press release issued on October 27 by the prosecutor of Bamberg, Germany, seven people were arrested in Georgia, members of the same group as Petah Tikva. Three of them were women.

Since 2005, Israel has been the center of online fraud through fraudulent websites for trade and investment. Israeli authorities allowed fraud to thrive, which soon grew into a full-fledged industry with thousands of employees and millions of dollars stolen from Internet users around the world.

Initially, these fraudulent sites offered to trade in foreign exchange transactions. In 2013, many agents began offering trading in a financial instrument known as binary options. After the Knesset banned sites offering binary options in 2017, after a report The times of Israel, many of these agents have switched to counterfeit forex trading, CFD (contracts for difference) and cryptocurrencies. Some have moved some of their activities abroad.

Israeli police arrested several of these agents, but almost none were prosecuted.

And when Israeli media reported on investment fraud, they often portrayed it as an individual transaction, largely ignoring the massive and powerfully interconnected dimension of what has become a real industry.

In recent years, law enforcement agencies in the United States, Germany, Austria, and, to a lesser extent, Canada, unlike their Israeli counterparts, have investigated, prosecuted, and convicted some of these Israeli fraudsters.

You are one of our loyal readers!

We are glad that you read X items h The times of Israel last month.

This is what we work on every day: to provide demanding readers like you with appropriate media coverage of Israel, the Middle East, and the Jewish world. Unlike many other outlets, our content is available for free – without paid access from the first paragraph. But our work is becoming more expensive. Therefore, we invite readers who can and for whom The times of Israel French has become important to support us by joining The community of Fr. The times of Israel in French. For the amount you choose, once a month or once a year, you can also contribute to this quality independent journalism and enjoy reading without advertising.