As the commercial hay market expands and becomes more structured, emerging producers are improving their technology and equipped with more appropriate tools to improve product quality and meet customer requirements.

This is the case of David Gwen of Ferme Francler in Saint-Julien in the Chaudier-Appalachian region. Running a dairy farm, the producer started in parallel six years ago in the commercial hay market. “I have always been interested in making quality dry hay. I saw the potential there, and we had a piece of land, ”he explains. Ferme Francler produces approximately 60,000 small bales a year, 80% of which are exported to the United States via Semican. “Year after year, we are growing slowly. We are currently cultivating almost 800 acres (324 hectares), ”says David Gwen. 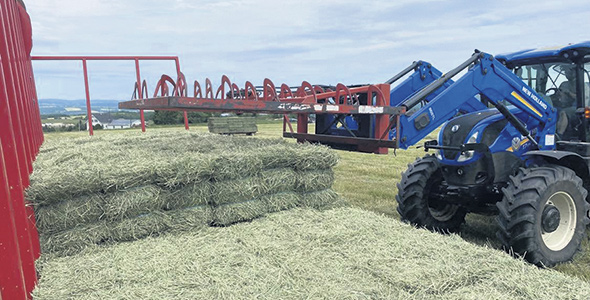 According to the CQPF, dry hay in small square bales (18 to 25 kg) is the most popular for export, especially on the east coast of the United States.

When he had the opportunity to sow new pastures, the producer sowed them with millet and bromgrass, herbs that were valued by American stable owners. While he makes three mows for his herd of cows, he is limited to two for his commercial hay. “Horses don’t like hay that is too young. That’s why we make the first incision a little later, “he says.

Always striving to improve, the Saint-Julien manufacturer has equipped itself with a smart meter to monitor the yield of its fields. “When it comes time to cut, I record the weight of my bales, and it tells me how many tons per acre I collect for each meadow. Everything is recorded in the register. Therefore, I can monitor the yield of my fields for many years, and together with my agronomist we adjust the application of fertilizers. »

David Guin also uses about twenty smart sensors to monitor the temperature of his bales. “When I harvest, I put the probes randomly in the hay. You should always pay attention during the first week. Thanks to the application on his mobile phone, he can monitor the change in temperature in real time. “It takes reading every hour. I’m home and I get an alarm when it gets critical. From 40 degrees Celsius the quality deteriorates, and if it goes higher, it is dangerous for fire. We are equipped with dryers, and we can respond when we need it. »

Last year he had the opportunity to cultivate 250 hectares (101 ha) additional. “I couldn’t give up, but we finished harvesting a little later than expected, and the quality of the hay deteriorated,” said David Gwen, who plans to use a second mower and four balers instead of two this summer to speed things up. stage of harvesting. “The goal is to mow the first one in three weeks,” he said. 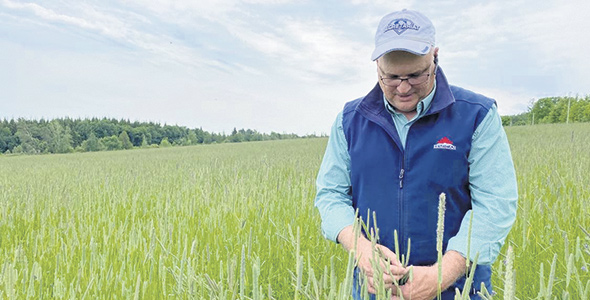 The biggest problem for commercial hay producers, apparently, is storage to protect precious bales from the weather pending their departure south of the border.

Hay of excellent quality requires a humidity of about 12%. In the prairie, the grass has a humidity of 70 to 80%, but after cutting it is allowed to dry in the field for three to four days. In the absence of precipitation, this figure will drop to 15-20%.

“We built one barn a year for three years,” says Valerie Poulenc of Ferme Valbois. Last fall, they added a third warehouse (62 feet by 80 feet), joined by two others (60 feet by 100 feet) and an old converted barn (55 feet by 120 feet). “We also have several other leased properties located in strategic locations. In connection with the rise in price of building materials, Valerie Poulenc said that the investment of almost 150,000 US dollars in a new warehouse built last fall.

This text was published in the May 2022 issue of L’UtiliTerre magazine.