The economic growth we are experiencing now is accompanied by a fact that has been forgotten for almost 20 years: inflation. What are the risks to your assets and how can you protect them?

In 2021, two schools were “killed” by how long the inflation we saw would last. Some analysts saw this as temporary, while others saw the beginning of a bullish cycle in commodity prices.

The first school attributed this to damage from covid: factory closures and supply chain disruptions led to rapid inflation. When the situation normalizes, inflation will stop.

In the second school, a bullish cycle of raw material prices began last year. In early 2022, many are in favor of long-term inflation, which will continue after 2022 and 2023. The last “super growth cycle” for commodities ended in 2008 with the subprime securities crisis, but price growth during this period (1990-2008) remained weak in Switzerland. In contrast to those days, the inflation we see today is more like the outbreaks of the 1970s.

0.6% is the official inflation for March 2022. Yes, you read that right. Your gas tank cost you more than 30% more than in February, but the Federal Statistical Office tells you: + 0.6% inflation in March 2022. Since the price of oil weighs on all other raw materials, I have some doubts. However, remember that even if this figure is correct, it gives us more than 7% inflation on an annual basis! Not seen since the 1970s.

Obviously, real inflation ”(the one you suffer from while shopping, filling an oil tank or a car tank, etc.) remains confidential information for economic and political circles. The former do not want to raise wages, while the latter do not want to be accused of rising prices.

It is not easy to explain briefly where inflation comes from, as it is influenced by many factors. Inflation is manifested in the difference in value between the creation of money supply and expected economic growth (sales of goods and services). 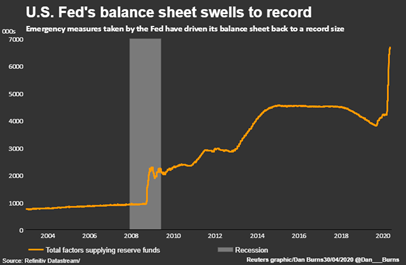 To illustrate my point, above you will find a chart of the balance sheet of the US Federal Reserve. We can observe three main periods of creation of the monetary system: 2008-2009, 2014-2015 and, finally, 2020 for the coronavirus. Pay attention to two things: the expansion of the Fed’s balance sheet in 2020, represented in absolute terms three times more than in 2008, and the phase of 2008-2019 did not lead to excessive inflation.

The following is the balance sheet of the National Bank of Switzerland, which follows the same trend. 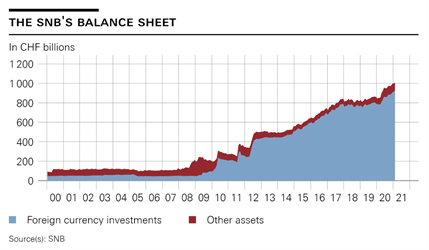 This liquidity has partly turned into savings for households, which thus have more money for the number of goods and services that have remained more or less unchanged (or even less at the time of plant closure). And since the prices of goods and services always catch up with the money created, we see a general increase in prices.

Jim Rogers also explains the rise in prices by making money in 2020:

“I said we have to buy goods for the last few months and even longer because we have seen a lot of money being printed. Every time money is printed, prices rise, especially if there is a war. I do not like to make money in war, but it is better to make money than to lose it, and I am going to own goods when the war ends, because there will be more inflation and more rising commodity prices.

How to take into account inflation in your wealth?

Don’t want to invest? Do you prefer your bank account or savings account? Be aware that from 2000 to the end of 2020, you “officially” lost 0.4% per year. Add to that account maintenance fees, negative interest and taxes… You lose 2% per year!

Let’s look a little longer. If you are 65 today, you have experienced a 100% increase in prices. So your “cash” savings are worth half of what they were worth in 1980, 40 years earlier. And again we are talking about official inflation …

You have to add taxes to inflation and, for six to seven years, any negative interest. These factors have exacerbated the persistence of purchasing power over time.

This allows me to say that savings or assets that do not grow by about 2% per year are irreversibly lost in the long run.

Economic growth and inflation in the 20th century?

As I wrote earlier, we are experiencing strong economic growth. The first period that comes to mind when talking about growth plus inflation is the “thirty glorious years”. This period lasted from 1945 to 1975. Over these 30 years, inflation in Switzerland has reached almost 150%, or about 1.20% per year (officially agrees).

According to the National Bank, banks have rewarded what may seem generous today, saving their customers up to 5.22% in 1974. These percentages offset 50% to 80% of inflation for the year. For 10 years, the share not covered by the profitability of savings was, however, the same as in the glorious thirties, ie a little more than 1% per year.

Adding taxes and various fees, we always return to the lost 2% each year. The main difference from the 1970s is the negative percentage, which increases the bill.

But we live in one of the countries that keeps its currency the best. Compared, French inflation increased to 169% during the period 1970-1980.

As we have seen, unpaid savings, ie sleeping on a simple account or under a pillow, lose an average of 2% per year with peaks that can reach 10%. Investing most of your assets is at least counteracting this decline in purchasing power in the long run.

In the next article, we will discuss existing solutions to protect against inflation.