In the current year and in the future, MoneyPark experts do not expect a further significant increase in mortgage rates. Volatility is expected to remain high, particularly due to high inflation in the US and Europe and fears of a global recession.

The Swiss economy is weakening

The Swiss economy started 2022 on a positive note, but since then the international outlook has worsened. The downward trend is caused primarily by the fall in external demand and the manufacturing industry. Indicators of the financial services and insurance sector, as well as the construction sector, are at an almost constant level. On the other hand, private consumption registered a somewhat positive development.

According to economists at SECO, Switzerland’s GDP should grow by around 2.6% in 2022 and 1.9% in 2023 as the economy normalizes. Risks for the world economy are connected, in particular, with the war in Ukraine and the development of the situation in China. In addition, the hidden danger is significant inflation in the United States and other currency areas and economies, as well as possible new restrictions due to the resumption of the pandemic. These factors may lead to high volatility in the capital markets and thus have consequences for the Swiss economy. SECO’s inflation forecast is 2.5% in 2022 and 1.4% in 2023.

In the first half of 2022, we saw a huge and unprecedented increase in capital market rates. This has affected fixed mortgage rates. However, in Switzerland and Europe, key interest rates remained low for a long time, although inflation in Europe exploded in the second quarter.

In the coming months, MoneyPark experts expect a significant increase in money market rates based on key central bank rates. A growing number of factors indicate that fixed mortgage rates have peaked and may stabilize at current levels: 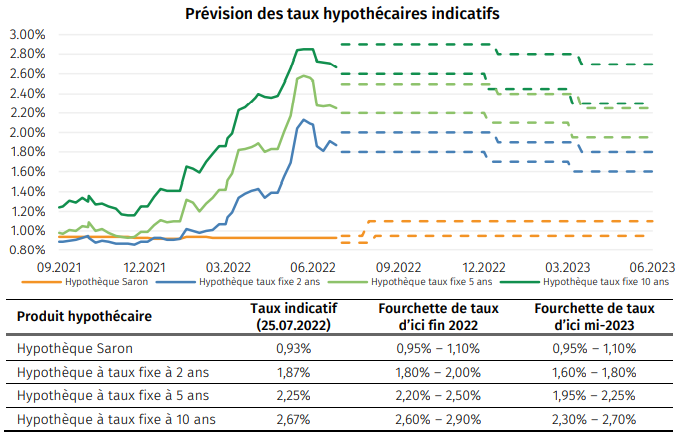 Record prices for housing are maintained

In 2021, house prices reached a new all-time high due to increased demand and stagnant supply of real estate. The situation should not change this year. The stable value of real estate has gained popularity during the pandemic, and the advent of the home office has changed the demand for housing. Peripheral areas should remain particularly attractive, while price growth in cities should be less pronounced than in recent years.

Determinants of the mortgage rate

Economic development and rates around the world

As an exporting country, Switzerland is highly dependent on the world economy and, in particular, on the EU, its main trading partner. The monetary policy of the ECB directly affects the EUR/CHF exchange rate. Therefore, MoneyPark experts also study the situation in the EU for their forecasts.

The following indicators are relevant: 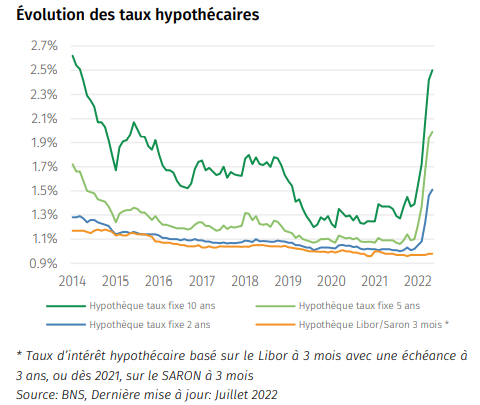 Negative rates will soon be a thing of the past

After the 2009 financial crisis, central banks around the world cut rates sharply to stimulate the economy with cheap money. With (anticipated) interest rate hikes by the central bank, the end of negative rates in Switzerland is imminent after more than a decade in power. Experts assume that the key rate of the SNB will increase by 0.5% and reach 0.25% by the end of the year. The sequence of events is very uncertain. Out-of-control inflation in Europe and the United States argues for further rate hikes, at least in the short-term money market. However, the risk of a full-blown recession if rates continue to rise contradicts this assumption. Therefore, there are many uncertainties in the forecasts. Experts believe that medium- and long-term mortgage rates will stabilize at current levels, and Saron money market mortgages will become more expensive