May 7 is an important day in the history of the Fifth Republic, because the event of this day is truly the day of accession of candidates from the new coalition of left and environmental forces, this new union, which we want to be popular, environmental and social!

The Communists are happy to take part in this wonderful political dynamic that we are launching today. 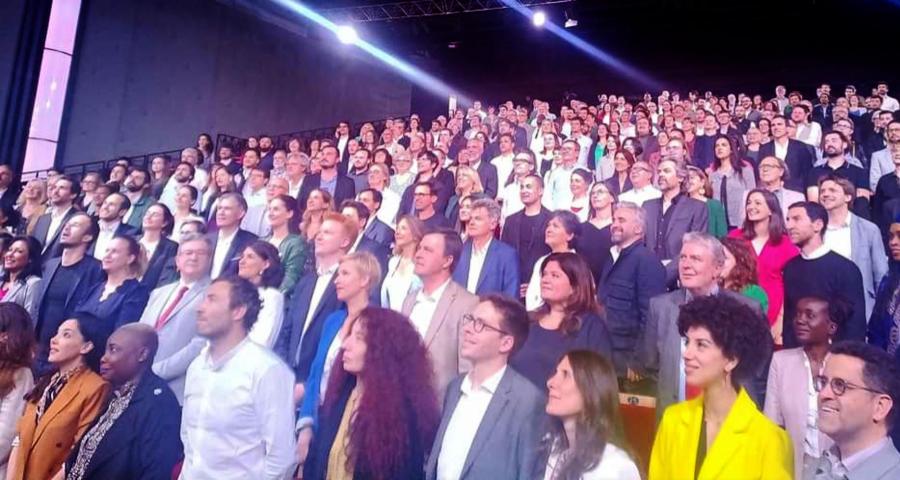 The event of this day is the presentation of the program, which we are creating together and which will significantly change the lives of French people!

Yes, this is an important day, because we have the opportunity now, in 5 weeks, to beat Macron in the National Assembly, electing a new majority on the left!

Defeat Macron and establish a new, progressive, truly left-wing government that will change the lives of the French.

What a great hope for all workers of our country, for retirees, for youth, children, students!

Here’s what I tell them at home, everyone I meet: yes, from July 1, with this new majority, Smic will increase by 100 euros a month, as well as all salaries. And with contributions to the financing of social insurance. Yes, from July we will put on the agenda retirement at 60, and employees will retire earlier. So, with the start of the school year in September, we will create an independent income for students that will allow them to study without working on the side.

These changes are possible if millions of French men and women take part, vote and start a great social and popular movement!

It is a hope that we must grow over the next 30 days. But above all, it is the hope that Macron will not get a majority.

With the stamped ballots of our new coalition, we will be able to beat the candidates Emmanuel Macron, LR and RN, who will be represented in our country.

We will be able to beat his ministers, who are showing the worst results in terms of French purchasing power.

We will be able to defeat these macronic candidates, such as Essonne, the right hand of Gerini and the CEO of startup En Marche, who previously worked at McKinsey for 5 years. Yes, maybe they dare to do anything!

He graduated from McKinsey firms and consortiums that appear on the accounts of the Republic;

No more tax evasion that drains our country’s wealth;

No more gifts to the richest as long as workers, employees, employees work at work and tighten their belts to pay the bills.

It is no longer necessary to reduce taxes for groups such as Amazon, Google, Apple, BNP, Societe Generale, Sanofi, Renault, Peugeot, which simultaneously distribute dividends and lay off employees.

And then I think of all the workers, the union activists, who are resisting without means before moving. I tell them: no more El Homri laws and Macron orders, no more laws that have deprived you of all means to protect jobs and better working conditions!

We will not only repeal these laws, but also restore the CCCT, give you new powers to interfere in the boards of directors, founding committees and even funds to finance your proposals.

Yes, our victory is directly related to the hope we will have in the coming days, and that is why our congress is important today.

Of course, we have differences in a number of subjects, but we all took on our responsibilities and decided to grieve, respecting these differences, not erasing them.

Because each of us will have the opportunity to create a group.

And if these groups vote together for the measures of social progress and social justice for the French that we have decided together, they will also be able to defend and implement their own proposals, in full autonomy and with respect for our diversity.

We now have 30 days to see the French and the French to persuade them to vote for the candidates for this new assembly.

30 days to seize power from finances, return it to the people, officials and rebuild the Republic.

30 days for France to finally talk to a world of peace and cooperation between nations.

30 days to be able to gather widely from the 1st round in each district.

Because our main opponent will be, I’m afraid, restraint.

Many of our fellow citizens today have withdrawn from politics. There are so many who, as one voter told me, are in a “democratic depression” and no longer believe in it! There are so many who can no longer vote against their ideas, vote by default, out of spite and never for them, hoping for positive change in the end.

With our beautiful, unifying candidates, let us make great efforts in the coming days in each district to unite people, to unite. To convince those who no longer believe in this, as well as those who have been able to use Le Pen’s bulletin, think about getting rid of Macron.

I think about all these constituencies, all these departments, as well as at home, in the mines, where the National Rally achieves the best results.

Here we have incredible challenges, enormous unifying efforts that need to be created to inspire hope. Not front against front, but rather project against project.

Because we have already defeated them in the cantonal elections, defeating them where their elected representatives did not have results. In their leaflets, they talk only about immigration, religion, division.

In our treatises we speak of human dignity, respect, equality; we are talking about the fight against eviction for rent, for the maintenance of the police, for the expansion of the hospital center “Lance”, which we received.

Yes, it is by showing our usefulness, by showing what we manage to get for our population, that we manage to make them come back. In addition, by fighting for the protection of our factories, we are demonstrating that if Bridgestone Béthune closes, it is not primarily through immigration, let alone a major replacement for Zemmur, but in fact through funding for capitalism, an allied government. and liberal Europe, which finances relocations within the European Union itself.

If our factories close, it is because of the power of exclusive financial services to the detriment of our jobs, our know-how, our industry.

That is why I welcome candidates similar to the candidacy of the Marine Tondelier, who will face Marine Le Pen, or even Jean-Marc Tellier, who will appear before the outgoing RN MP, but will also face Ms. Pannier-Runache, who jumped there with a parachute. .

I congratulate Francois Ruffen, who is also fully mobilized against the far right, who came out on top in his constituency in the first round of elections.

I applaud these candidates as much as Bruno Nottin, who will meet with candidate Jean-Michel Blanker, who has been organizing a massacre against public schools for five years.

My dear friends, my dear comrades,

Yes, wonderful and great challenges lie ahead. To unite the French people and build with them the most beautiful majority, the happiest majority, the one that will bring a smile back to the faces of our fellow citizens, thanks to the reforms we have been waiting for. These happy reforms that will finally change lives!