With a six-fold market capitalization to $728 billion in 2021, an average yield of 14% on $15 billion in distributed earnings, it’s hard to ignore this new bet on the investment opportunity. But what is staking, how does it work and, most importantly, how can you participate?

Mining is good, staking is better

For a decentralized blockchain to work, its participants must agree on various transactions and how they can be verified.

There are two main ways to verify transactions and reach consensus. The first and oldest, used in particular by the Bitcoin network, is called “Proof of Work” (or “PoW”). It consists in the competition of computers to solve a complex mathematical problem. The participants in this competition are called miners, and whoever wins the race gets the right to write the next block in the blockchain. It will be rewarded with transaction fees and newly released tokens. While this technique is very safe, it is proven to be impossible to go wrong to this day, it is also very expensive in terms of energy, which is its biggest weakness.

The second method is called Proof of Stake (PoS). In the Proof of Stake network, there is no need to run powerful computers, since the participant who will have the privilege of writing the next block is chosen randomly, not through a competition. Participants who have placed their tokens in a staking contract are eligible, and this random selection is weighted according to several parameters, such as the number of tokens placed or the duration of the placement. As with mining, the chosen one receives the newly released tokens as a reward, as well as transaction fees.

A good analogy would be a lottery in which the money invested in the ticket is not lost. Placing its tokens in a staking contract gives us a chance to be rewarded for participating in the protection of the blockchain. This action is called “stacking”.

To give you an idea of ​​the difference in consumption between a transaction on the Bitcoin network (PoW) and a transaction on the Ethereum network in PoS, imagine the 830 meter tall Burj Khalifa in Dubai. If this represents a Bitcoin transaction, an Ethereum transaction will be the size of… a small one and a half centimeter screw, or 99.99% smaller. When it comes to energy, there is no comparison. 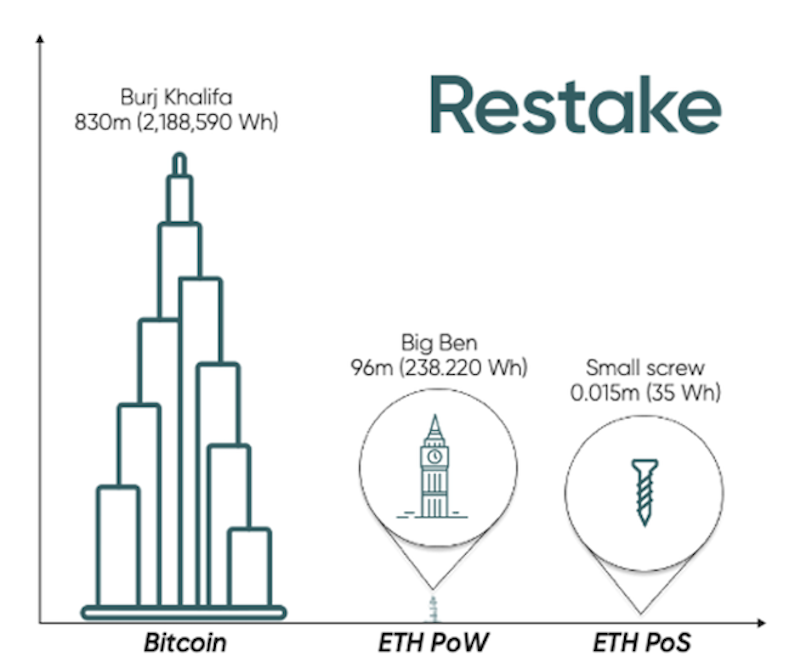 Note. There are 3 elements above simply because the Ethereum blockchain, while already more energy efficient than Bitcoin, is in the process of transitioning to Proof of Stake. This will allow it to be much faster, cheaper, more scalable and much less power consuming.

What to do as an institution?

Any private investor can buy cryptocurrencies on the exchange platform and place bets on the same platform. Coinbase, Binance, Kraken, there are many options.

Nevertheless, such a choice should not be made by a professional investor. Essentially, it takes away control of the investor’s portfolio. Added to this is a level of opacity, as the investor has no control or even an idea of ​​where their cryptocurrencies are held (in other words, leverage).

Above are the 3 main steps for staking as an institution. The first step is to buy your chosen cryptocurrency, usually through an exchange platform. You then have to choose where these cryptocurrencies will be stored, which is probably the most important step. You can choose to use and manage your own digital wallet or entrust this task to a professional service provider. Finally, all you have to do is choose the staking service that is right for you. There is nothing complicated about it, you just need to find the right partners.

4 parameters to pay attention to

There are a few things to keep in mind when bidding. Different settings and limits will affect things like revenue generated or liquidity. Let’s first take a look at the Solana cryptocurrency page on the site together Reward rateswhich we advise you to study. 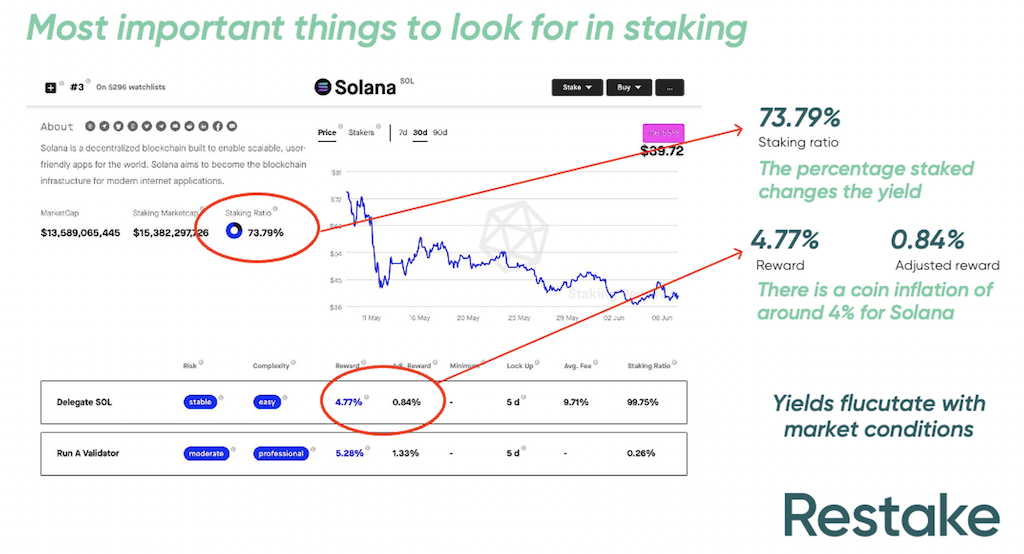 We can see several details such as the market cap, price, its curve and popularity of the token. Let’s focus on the 4 most important ones, namely: “adjusted reward”, “bet ratio”, “blocking” and the difference between delegation and verification.

You will notice that there are two values ​​in the “rewards” category. The first is the nominal yield, and the second is the inflation-adjusted yield. Because cryptocurrencies also have inflation due to the creation of new tokens. In short, if you don’t stake your cryptocurrencies, they lose value. 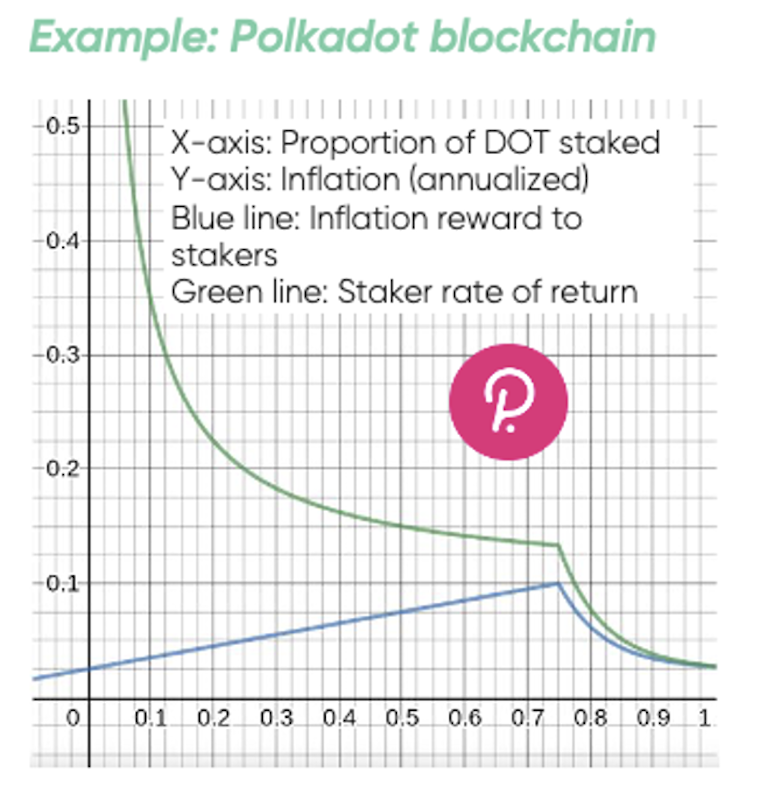 Take the case of Polkadot, which aims for a 75% bet ratio. Polkadot believes that cost is the best compromise between network security and liquidity. Indeed, if the betting ratio becomes too low, the security of the network can be compromised. Thus, the profitability will increase to encourage users to place bets and increase the odds. By the same logic, a ratio that is too high will indicate that too many assets are placed and that there are not enough tokens in circulation. The offered return is sharply reduced above 75% to encourage stakers to use the currency.

The main thing to know about staking is that once you have placed your tokens in a staking contract, it is often not possible to withdraw your funds immediately. There is a waiting period that can last from a day to a week or even longer, depending on the blockchain.

To overcome this illiquidity, some so-called “liquid staking” solutions offer to receive a token that represents the staked asset at the time of staking to be able to use it in other transactions during that time. However, this method carries additional costs and risks.

There are also two main options for the institutional player who wants to take advantage of staking. The first option is to go through an external validator who takes care of the technical considerations in exchange for a percentage of the profits.

The second option is to create your own verification infrastructure. However, this alternative is not for everyone, as it requires knowledge of server development and management and will only be profitable with a significant number of tokens placed.

What is the future of staking?

Over the next few years, we see three important changes in the betting industry.

First, the emergence of a new version of Ethereum that will be PoS instead of PoW should strengthen the dominance of Proof of Stake in the blockchain industry. Although it is less proven than PoW mining, we believe it is a much more sustainable alternative in the long term.

Second, we expect to see more venture capital deals in PoS projects. It would be like this: venture capitalists with teams that have experience in blockchain work would look for the next promising projects, for example, investing a hundred thousand dollars in several projects. The day a project like Solana takes off and the cryptocurrency goes from $0.10 to $100, the $100,000 invested will become $100 million, giving VCs a large amount to leverage this blockchain, creating additional recurring revenue from resale , thanks to the attitude. Another option would also be to position yourself as a validator, and private or institutional investors would delegate their staking activities to them.

Finally, it is easy to imagine the democratization of new financial products based on cryptocurrency staking that would work like a bond portfolio. The formula is the same as for a debt portfolio: choosing different cryptocurrencies with different risk and return profiles to create a portfolio that takes into account the return and target risk. We offer two examples below:

This first portfolio is more conservative with relatively low volatility and a target return of around 8%.

This second portfolio is much more aggressive. First, we note stronger concentration with target returns doubling to over 23% and volatility continuing on the same path.

Despite 10 years of existence, staking remains a relatively unknown mechanism, especially among institutional investors. While many are distracted by the volatility of cryptocurrencies and especially Bitcoin, Proof of Stake cryptocurrencies are slowly making their way to establishing themselves as must-have assets that offer fixed returns in tokens. Staking is one of the best ways to launch digital assets at least to combat inflation.

If you have any questions about staking, don’t hesitate to contact our team. With our Retake service, we customize personalized solutions for venues. Our infrastructure is specially designed for execution with quality control. We also offer a consultation to explore with you the different currencies you are interested in and find the asset management solution that best suits your situation.